This year, the annual Talking Galleries conference took place from the 20-21 January. Hosted at the Museu d’Art Contemporani de Barcelona (MACBA), the conference welcomed a diverse range of speakers that lead discussions on issues such as: gender representation and equality in the market, alternative gallery models, social media and publishing in addition to a variety of other topics. Talking Galleries Lab (TG Labs) invites postgraduate students to the conference each year with the aim of widening some of these areas of research. This year two Christie’s Education students, Micaela Dixon and Rasha Hatoum, were invited to participate in the conference.

On the first day at the MACBA Auditorium the keynote address was delivered by Emmanuel Perrotin in conversation with Georgina Adam of the Art Newspaper. Perrotin, a completely self-made gallerist, spoke saliently of his career trajectory, work ethic and eagerness to meet the demands of Asian clients early on. This year marks the gallery’s third decade in business and this success is owed in part to these very characteristics. The keynote speech addressed the ways in which globalization has increased our ability to reach artists and collectors around the world. However, the most poignant part of Perrotin’s address was the respect and admiration he conveyed when speaking of his gallery staff. Stressing the importance of positive working relationships as a crucial pillar for growing galleries, Perrotin reflected on moments of crisis in his life when he had no choice but to fully rely on his staff to operate the gallery to the highest standard.

Rasha and Micaela share a few thoughts on memorable moments from the conference. 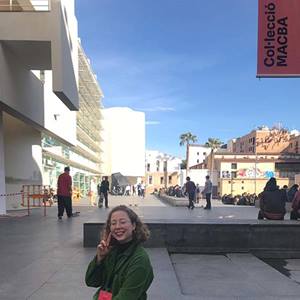 Choosing from such an impressive program is difficult but there was one panel that particularly stood out. The panel following the keynote was dedicated to unpacking the topical issue of Women Artists on the Market. Moderated by Anny Shaw of the Art Newspaper, the panel featured Clare McAndrew of Arts Economics, Vanessa Carlos the Founder of Condo (and owner of Carlos/Ishikawa) and Lisa Schiff of Schiff Fine Art Advisory. The panel was diverse, honest and actively weary of making the popularity of female artists fall prey to being the newest art world trend. McAndrew started off the panel by outlining some of the figures pulled from her most recent report for UBS and Art Basel. On average, McAndrew reported that the discount for women artists at auction is 50%. From here the panel delved deeper into gender-based issues pioneered by Carlos, who spoke most pertinently to the inherent social biases that prevent female artists from finding the same success as their male counterparts. For example, male art students often find work as art handlers or technicians. These are jobs that are on the whole; more labour intensive, well-paid, often part-time and allow them the chance to afford a studio practice. On the other hand, female art students are often employed as full-time art administrators. These roles are often paid poorly and do not provide the money nor the time needed to invest in a studio practice. These types of ingrained cultural biases framed the majority of the panel discussion. The panelists raised a poignant question; how do we fix these socially ingrained structural issues? And the answer is far too complex to begin to tackle in an hour. This panel, amongst a myriad of others, have cited an exciting moment for female artists. 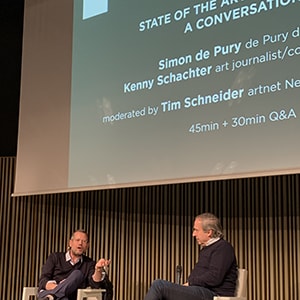 A recurring theme throughout the conference was talk of the “Gallery Crisis”. This has been at the center of recent art world conversations and was brought up unexpectedly throughout several panels. It was first addressed in a conversation moderated by Tim Schneider of Artnet, between Simon the Pury, the Mick Jagger of art auctions, and Kenny Schachter, the witty and provocative Artnet journalist. They began by discussing the state of the art market today and touched on many issues facing the small and mid-sized galleries operating in an art ecosystem that largely benefits a small number of top-tier dealers. Many gallerists share their discontent regarding unaffordable rent and the art fair system. This topic was later covered in a panel titled “Is the art fair system unfair?” Moderated by Melanie Gerlis of the Financial Times, the panel introduced two fair directors: Elizabeth Dee, Founder of Independent Art Fairs and Marbel Lopez, Co-Director of ARCOMadrid. Here, they elaborated on the gap between blue- chip galleries and their smaller counterparts who face mounting financial pressure. Addressing the fact that the art fair system appears to be a perceived rat-race, both art fair specialists brainstormed alternative ways of turning it into a collaborative project that benefits players across all levels of the art market.

In addition to this, other panels and presentations provided hopeful solutions aimed at addressing rising rents for burgeoning galleries. Eugenio Re Rebaudengo, founder of Artuner, spoke to his experience setting up his virtual gallery that exhibits its shows online or in pop-up spaces. This innovative and nomadic business model proved to be both efficient and highly successful. It afforded Artuner the opportunity to be at once flexible and creative in their choice of exhibition venues while still able to participate in prominent and prestigious international events such as the Venice Biennale.

From both of us as attendees, we wanted to extend a big thank you to the organizers of the conference. Attending the conference was both a pleasure, greatly inspiring and has given us unparalleled learning experience. We are so grateful and are keen to attend the conference in Barcelona next year!