Materials and Furniture: The Legends

Materials and Furniture: The Legends is a ten-session series that seeks to explore and outline materials and design.

American sculptor Robert Wilson has recently remarked: “a chair is for me like a sculpture, I like to look at it in space and to see it from different sides. I do not see chairs as having any function other than that.’

Since it began being crafted for royalty and aristocracy in the ancient world, furniture has been situated at the intersection of architecture, art, crafts, design, taste, and power. Furniture has come to express ideas related to the changing nature of society, technology, industrialization, and innovation; communicating a wealth of information about creativity and the cultures that produce it. Living with fine furniture has come to signify taste and sophistication for those concerned about cultural surroundings.

Who are the world’s most prolific and admired furniture designers today? Who are the talents who have achieved unparalleled influence by participating in forming the contemporary furniture movement? Who are those who have come to define the quintessential furniture of the 21st century in its global and powerful expression? What materials, methods, concepts, and poetic notions exist at the forefront of furniture design today?

In the new series Materials and Furniture: The Legends, design historian Daniella Ohad will host nine of the most intriguing talents in the field of materials and furniture in conversations about the increasing presence of furniture design in contemporary culture—discussing the exciting, surprising, dynamic, and influential area of design and its place in our culture. In an introductory session, Dr. Ohad will provide an overview of the history of modern furniture design through historical analysis of styles, movements, visual vocabularies, conceptions, shifting boundaries of crafts and design, and developments in material culture. This survey will function as a backdrop to provide the relevant context according to which the contemporary can be better comprehended. 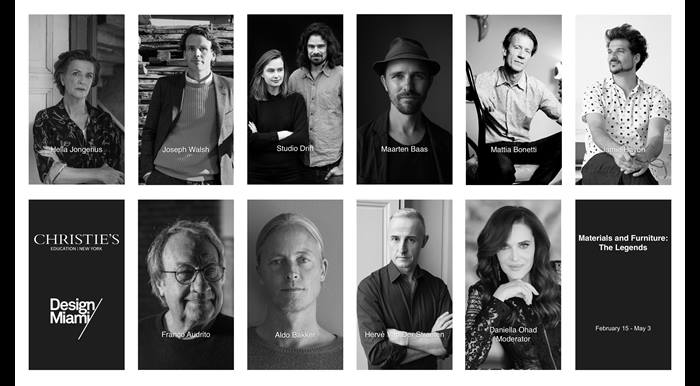 Dutch designer Hella Jongerius was a founding member of Droog Design, the Amsterdam-based group that came to revolutionized design culture in the 90s. She is known for the way she fuses industry and craft, high and low tech, the traditional and the contemporary. Base in Berlin, Jongerius works out of her studio Jongeriuslab and produces projects for such clients as Maharam, KLM. Vitra, Royal Tichelaar Makkum. Her design always contains powerful narratives and celebration of the value of the process.

Italian architect Franco Audrito was the co-founder of the avant-garde group Studio65 in Turin at the age of 23, participating in the formation of the Italian Radical Design (also known as the ‘Anti-Design’) Movement. The driving force behind the group was social and political, while their work, such as the iconic Capitello Chair and the Bocca Sofa came to respond to the cultural climate of Italy during that time. Through the use of pop imagery and humor, Studio65 created utopian visions that brought to the birth of Italian Postmodernism.

Dutch artists Lonneke Gordijn (b. 1980) and Ralph Nauta (b. 1978) founded the multi-disciplinary DRIFT in 2007. In their Amsterdam practice, the duo create experiential sculptures, installations and performances, while seeking to illuminate the hidden properties of nature with the use of technology. Finding the parallels between man-made and natural structures through deconstructive, interactive, and innovative processes has been a core principle of their signature. They have recently created an installation for New York City Ballet’s Art Series 2023; installation at the Shed; received the Collab Award from the Philadelphia Art Museum; and their collectible pieces are represented by Carpenters Workshop Gallery.

Aldo Bakker stands out for objects of exquisite, minimal shapes, materials, and colors. Yet, despite their tranquil appearance and the modesty of their monochrome skins, his objects are anything but submissive, and always determine the rules of the interaction.
As an autodidact Bakker carefully studied the oeuvres of some of the most idiosyncratic artists of the modern age, with whom he shares a fundamental interest for the language of their favored medium. He currently has a solo show at the Kunstmuseum Netherlands; his limited edition furniture is represented by Carpenters Workshop Gallery; his industrial design made for Georg Jensen, Karakter, Puiforcat, Sèvres, and more.

Dutch designer Maarten Baas graduated from the Design Academy Eindhoven in 2002 and founded his studio in Hertogenbosch, the Netherlands. He is considered one of the most influential artist designers of the early twenty-first century, with work that straddles boundaries between art and design. In his work, he embodies conceptual art, craftsmanship, installation, public space and performance. His most iconic work -- Smoke, Clay, and Real Time, have brought him to a world’s recognition. In 2017, his first major museum solo exhibition was opened at the Groninger Museum. His early work was represented by Murray Moss; his current furniture is represented by Carpenters Workshop Gallery.

Iris designer-maker Joseph Walsh established one of the leading workshops in Europe at his parents’ farm, outside of Cork, Ireland. He has reinvented the method of bentwood, while creating furniture and installations in abstract, dramatic forms. At his studio, he employs best talent from around the world, in various disciplines including the core areas of wood working and stone carving. In addition to wood, he works with stone, resin, and recently with bronze. His work is represented by A Lighthouse called Kanata in Tokyo, and his work was exhibited across the globe.

Swiss designer Mattia Bonetti has worked in Paris from the very beginning of his career. He started as a textile designer, and once partnered with Elizabeth Garouste in the 80s, pioneered the design-art in the 80s. The two employed a neo-Baroque language, blended with prehistoric and primitive inspirations, produced handcrafted objects, and became the leading force behind the cutting-edge. Since parted from Garouste, Bonetti has created objects in a variety of forms, rooted in the history of French decorative arts. He is represented by London-based David Gill Gallery.

Paris-based artist-designer Hervé Van der Straeten was first known for his jewelry, and later expanded to furniture. Today, his atelier employs dozens of craftspeople and he enjoys a worldwide recognition for his furniture, mirrors, and lighting. His work is recognizable for the way he combines contrasting materials, bold variations of form, and defiant volumes, with precision and detail. A graduate of the Ecole des Beaux Arts, Van der Straeten brings a heritage of craftsmanship and traditional materials to his furniture and to contemporary design. Since 2005, his work is represented by Ralph Pucci.

Spanish designer Jaime Hayon established his studio in Valencia in 2000. He stands out for his knowledge of artisan skills and his inherent creativity has allowed him to push the boundaries of many mediums and functions, resulting in collections for very diverse clients. His concern for the conservation of craft skills has joined his path with high-end traditional companies concerned with the evolution of their work. He has collaborated with such brands as Baccarat, Choemon in Japan, Bosa Ceramiche and Lladro and his collectible furniture is represented by Galerie kreo. Times Magazine included Hayon as one of the 100 most relevant creators of these times.

Read our Frequently Asked Questions to find out more information about courses.

All virtual courses are delivered over Zoom with high quality sound & video. There will be an interactive Q & A with the academic as well as time for a group discussion through the lecture.

Sold Out
Sold Out
Learn More

Design in the City | New York

Sold Out
Sold Out
Learn More

Materials and Furniture: The Legends

A Deep Dive into Contemporary Art

Arts of the Qing Dynasty

Transacting in the Art World: A Legal and Practical Guide

From Artist to Auction House

One Week in the Art World: Hong Kong

Collecting Handbags as an Alternative Asset

Jewelry Jaunts: Diamonds on the Soles of Our Shoes

In Pursuit of the Artistic Treasures of China

Careers in the Art & Luxury World

The Arts of Islam Across Time and Space

A Global Journey of Art, Technology and Business

From Passion to Investment: Post-War and Contemporary Art

From Song to Qing: Symbols in Chinese Paintings

Investing in Art: Art as an Asset Class

Photography and it's Markets

Exploring Art: From the Renaissance to Contemporary

Connoisseurship and the Market: Chinese Works of Art

Paris: Jewels of the Place Vendôme