On 17 September, Christie’s Education will launch a new online course History of Watches: 1700 to Now. Dr Andrew Hildreth, independent watch consultant, will introduce the development of watches from eighteenth-century pocket watches to today’s wristwatches that bring together science, engineering and incredible artistry.

What lay behind the movement from pocket watches to wristwatches in the early 20th century?
Partially style, it was a new fad, and partially convenience. Wearers no longer needed a chain or pocket, but could take a quick glance at their wrist instead. But also, improvements in mechanization allowed for smaller movements to be made that retained the same accuracy. Rolex was a prime leader, while Cartier’s Santos, made for the Brazilian airman Santos-Dumont so that he didn’t need to take his hands off his instruments to check the time, was a fascinating early example.

What would you consider the most extraordinary story for either a timepiece or a brand?
It would be the invention of the concentric balance spring that is the heart of every mechanical watch. For over three-hundred years there have been arguments over which of two rival seventeenth-century scientists, Robert Hooke and Christiaan Huygens, had invented the spring. But the smoking gun recently turned up in a house sale in Hampshire, a folio proving that Hooke had proposed it first. What’s remarkable is that it’s Hooke’s fault it was ever lost: he’d taken notes home to prevent their being copied - and then lost them!

What period of the 20th and 21st centuries do you think had the best sense of design and style?
I don’t think there is only one! Good design never goes out of style. The Cartier Tank is as relevant today as it was a hundred years ago. The Royal Oak and the Nautilus, both Gerald Genta designs, are more sought after than ever. There is renewed interest in the designs of wrist watches from the 1950s and complete collections are based on the variations of case and watch design. Some designs, such as the Rolex Oyster and Richard Mille watches, are timeless. By the same token, there are some designs that are best forgotten and generally - they are!

Image of the Cartier Tank

If you were to recommend a class of vintage watches that you think collectors should take more of an interest in, what would you suggest?
Variations in the early Cartier Tank. I wish I could claim credit for this, but there are a number of important and knowledgeable collectors out there who are exploring this brand and model, and with a good reason. There was a bespoke nature to early Cartier Tanks and the differences in design and low production numbers make them highly collectible.

What would be your top picks from all the watches you discussed in the course?
Not an easy question! I will go for two watches for different reasons. The first would be the Patek Philippe J.B. Champion Observatory watch, ref. 2458. This was made for the American lawyer using an observatory movement, a movement so accurate that it had been awarded a Bulletin de Marche, or certificate, in tests at the Geneva Observatory. It is unique in every sense of the word. 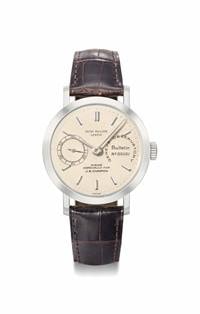 The second would be the Greubel Forsey QP watch. It’s a remarkable achievement and perhaps not yet given the plaudits it deserves. The western calendar creates a number of problems for a mechanical watch. Not least of which is adjustment, perpetual winding, and the idiosyncrasies of the calendar, leap years being a perfect example. This is the only watch that gives time, day, date, year and a host of other metrics both forwards and backwards in time. It is an analogue time computer, wristwatch sized, and required a whole new way of thinking about the gearing mechanism.

History of Watches: 1700 to Now online course is currently available in English, with a Mandarin subtitled version coming in 2020. Find out more and register for the course today.